I have been drawn to Australia for a long time. I got a Working Holiday visum just within the window of opportunity, and explored the country for many months. Ever since, I’ve suffered from the ‘boomerang syndrome’. Once you’ve been, you always want to keep coming back. Which I did several times at irregular intervals.

The ancient depths of Gondwana

I can’t even begin to define my favourite place in Australia. It’s such a vast and unique country, with awe-inspiring prehistorical landscapes everywhere. Even the desolate desert areas of the Outback are fascinating. I could be on walkabout in Australia for months without getting bored – and still run out of time! 😉

Australia is the most ancient continent of them all. Some of it was already present on the surface of the Earth at the beginning of the geologic time scale, when the rest still had to ooze from the crust or bubble up from the mantle over many millions of years.

Way out in the scrubs of northern New South Wales, nearly 800 kilometers inland from the east coast, lies the Outback mining town of Lightning Ridge. It’s a fair bit off the beaten track, but it’s worth the detour.

It’s the only place in the world where the elusive black opal is found.

Opal is unlike any other gemstone. The sheer array of colours, shapes and forms that occur in them, the way they shift at each angle and change with the light that falls onto them is truly mesmerizing. Black opal is the most precious of them all, enhancing the luminous colours with dazzling contrasts.

It’s like northern lights and a volcanic eruption simultaneously frozen into iridescent stone, forged from the ancient depths of Gondwana. And it’s difficult not to get enchanted by its beauty. Some opals even have galaxies captured within. 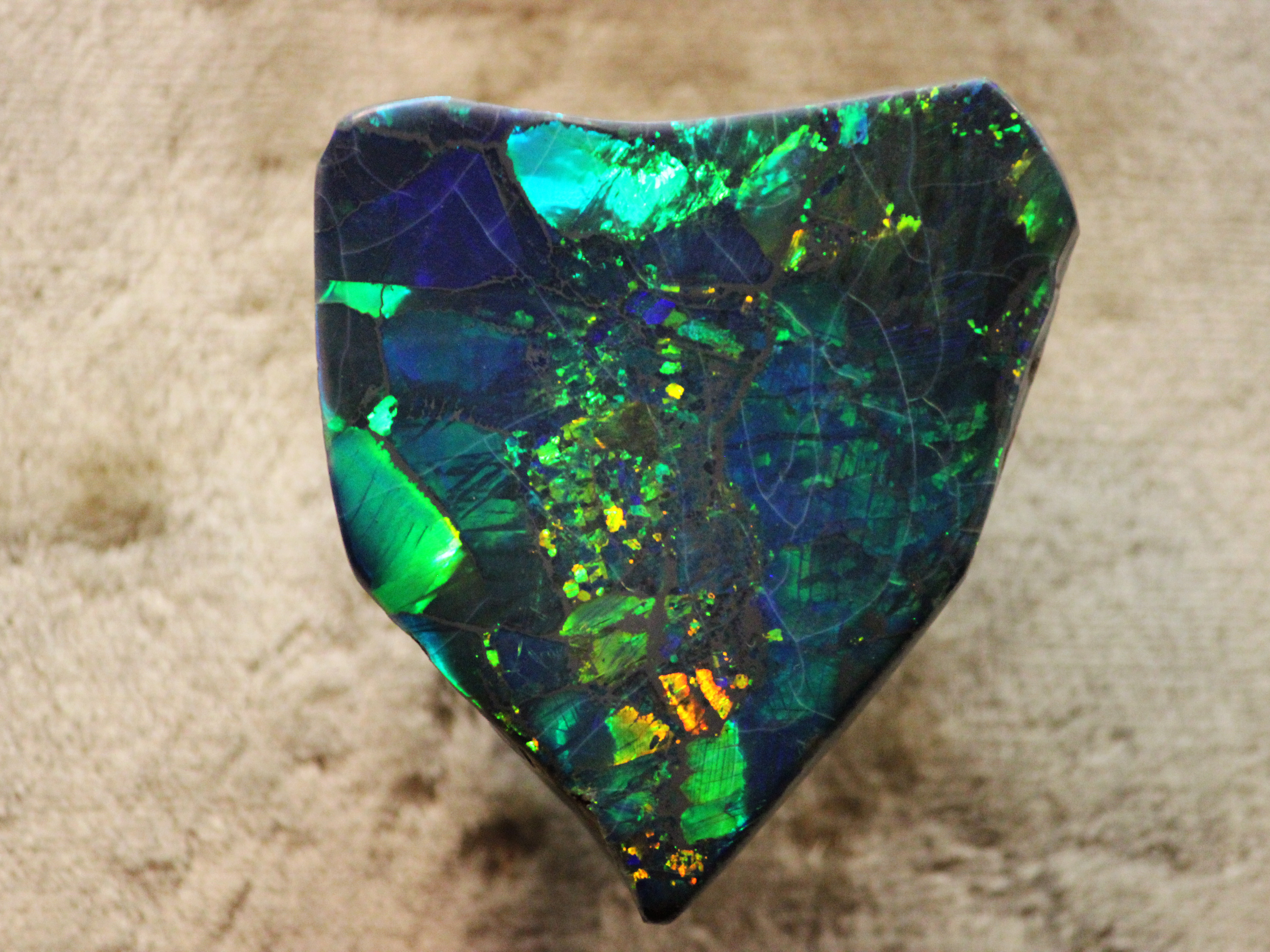 A trip into the Outback mining towns

The landscape around Lightning Ridge is dotted with heaps of opal rubble and miscellaneous mining equipment. Signs warn you not to stray off into the bush, as you might fall unsuspectedly into a hidden or obsolete mining shaft. These are all small scale mines, a maze of holes and tunnels beneath the ground. Most of them are operated by basic mechanical equipment.

People who live here make creative use of just about everything. Quirky works of art made from car wrecks, random machinery parts, sheets of corrogated iron, rusty bicycles and pieces of wood are found all around town. Somebody even built a castle out of bottles and rocks.

Lightning Ridge has its own underground opal mine museum, where you can get a sense of the pioneering history and the hardships the miners had to endure to extract the precious opal. In the dug-out ‘cinema’ in one of the excavated cavities you can watch an interesting documentary about the lifestyle of the local characters. And what it is that draws them to Lightning Ridge – besides the opals.

There are lots of craft shops where you can buy freshly dug opals directly from the miners. Or have your rough nuggets cut and polished into a nice & shiny shape. At the Australian Opal Centre you can see various collections and exhibitions, and learn about the multi-facetted aspects of opal mining.

The fossicking heap outside the Information Centre.

There’s even a huge fossicking heap outside the Lightning Ridge Information Centre, where you can try your luck at finding a nugget of opal. Miners dump their leftover opal rubble there, for the occasional visitors and locals alike to enjoy a bit of fossicking for fun. Of course it has already been sifted through many times. But you can still find some nuggets that were overlooked in the process. Someone actually got lucky and found quite an impressive one not long before I was there.

And I could feel the opal fever creeping in and taking hold of me as I scavenged around it, looking for the shiny bits. Unsuccesfully. I didn’t strike it lucky.

You can explore the area around town and its quirky attractions on a number of routes. They are marked – in a fair dinkum Lightning Ridge way – by different coloured car doors.

Lightning Ridge itself is a fairly modern urban centre with all the basic comforts, amenities and even an olympic sized swimming pool. But the makeshift mining camps that lie beyond in the fabled opal fields of The Grawin are something different altogether.

Dusty road to The Grawin.

Once you head out into the bush, you are largely off the grid. The people who live there have to be self-sufficient in almost every way. And the road runs out of pavement long before it reaches The Grawin. It’s not even on the official map. I got an improvised map with rudimentary roads drawn in at the Lightning Ridge information centre.

So I ventured off into the wilderness – and rocked up at the Grawin’s Club in the Scrub just before sunset. To the bemusement of the local clientele, who were quite surprised to see a foreign sheila in a rickety car emerging out of the scrub unexpectedly.

The Club in the Scrub

But the locals were very welcoming. I ended up having a great time with them. There happened to be a party going on, as one of the residents was celebrating a milestone birthday. There was live music, and someone improvised as DJ to keep the tunes going all night. The place was full of rugged & tough looking blokes with lots of stories to tell.

Some of them might well be millionaires, but you wouldn’t be able to tell by the way they look. Or dress for that matter.

Funny road signs at The Grawin.

The next day, one of the friendly locals invited me on a spontaneous drive around The Grawin. He liked to show me the interesting places and talk about the history. There are no street names anywhere, and the roads are bumpy & dusty and perpetually under repair. But there are also lots of artistic creations, a botanical cactus garden, and even a 9-hole golf course.

And of course several bush pubs have been crafted. The Club in the Scrub has its own Weather Rock too.

I was also offered the rare chance to go down into the ground & see a real working opal mine. Not just any mine, but the one where the biggest black opal in history was found, about five years earlier. It even features in the Guiness Book of Records. It weighs more than 2 kilo and is officially measured at a staggering 11.341 carats. A picture of it along with the Guiness Book of Records certificate hangs proudly in the Sheepyard Inn.

Inside a working opal mine at The Grawin.

Another stunning variety is boulder opal, with intricate matrixes of ironstone and colourful veins of opal shining through. They look like translucent tectonic plates, with rudimentary continents from the time before Gondwanaland emerged.

Boulder opals are only found in the outback of central Queensland, even further beyond the black stump and the Capricorn Highway. The Queensland boulder opal fields are nearly 1000 kilometres inland from Rockhampton.

Running out of time…

I seriously considered going there as well, but it was just too far out. And I was running out of time everywhere. Even more so after bumbling around the opal fields of Lightning Ridge and The Grawin, for a longer time than I had originally planned.

But it was absolutely worth it! 🙂

The Club in the Scrub.

Lightning Ridge and The Grawin map

This handy interactive map shows several interesting places around Lightning Ridge and The Grawin. You can also zoom in on the different sections of the route for more details.

This is one of the most popular stories across all Wilderness Coffee & Natural High pages.

Do you have a question or a comment? Please share them in the comment box at the bottom of this page. Other readers can also benefit from your feedback and the extra information in my reply. Thank you for sharing 💚

In these uncertain times, things can change quickly. Procedures are constantly evaluated and updated. For the current situation regarding Covid-19 related travel advice and restrictions in Australia, see Health.gov.au.

At the end of 2012 I went to Australia to see the solar eclipse in north Queensland on November 14. In Cairns I decided to rent a car and go bush. I took the inland road and camped along the way in various national parks, outback towns, and sometimes even in the middle of nowhere, emerging a month later at the southern end in Melbourne.

© All photo’s on this blog are my own, and subject to copyright (unless credited otherwise). Please contact me if you would like to use a particular picture you’ve seen in one of my articles. You’re welcome to share a link to my blog articles and pictures on social media.

The Hazards – Scrambling up to prehistorical views

Northern lights – Energy from out of space pouring in